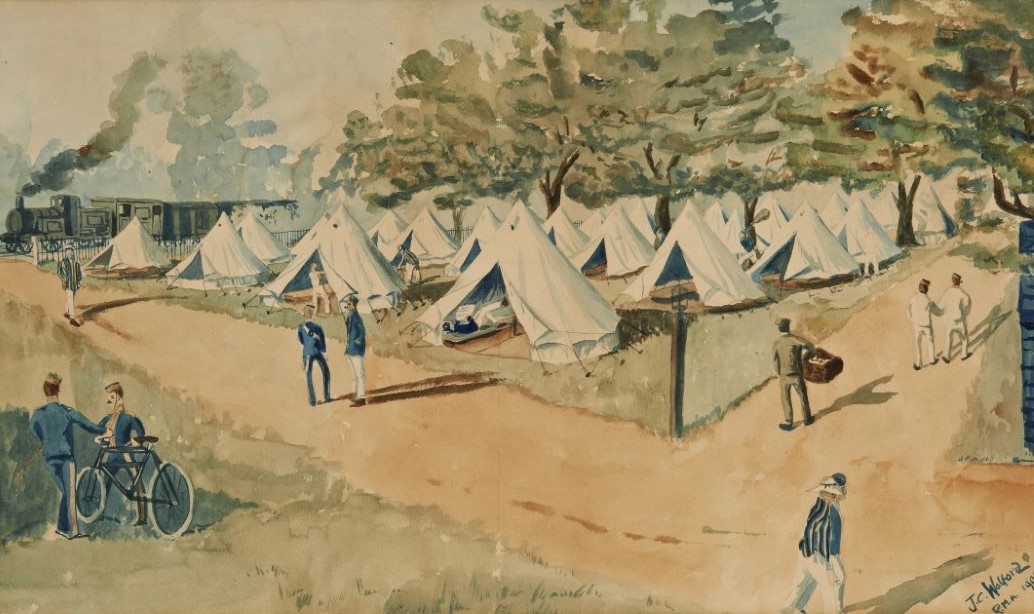 For February’s Object of the Month we are delighted to share an early watercolour by artist Major John Walford DSO RA that the regiment has recently acquired.

Walford is known for the large number of images he painted of Gunners on the Western Front during the First World War which provide a unique insight into the difficult conditions soldiers faced during the conflict. Moreover, it has been suggested that the impact of Walford’s own experiences during this time may have led to his later dismissal from service and subsequent imprisonment.

Born on 22nd May 1882, Walford was gazetted into the Royal Artillery aged 19 on 23rd July 1901. He trained at the Royal Military Academy in Woolwich, and served in India between 1906 and 1909. At the time of the 1911 census he was living with his wife in The Queensbury Hotel in Amesbury. He was promoted to captain in July 1914 and deployed to France with 119th Battery RFA in August 1914. The Battery was amongst the first to engage the enemy and fought with distinction at Elouges in Belgium. Captain Walford was awarded the DSO "for gallant conduct at Elouges on the 24th of August, where he was wounded in two places, and at Le Cateau on the 26th of August, where, in spite of pain from his wounds, he showed a fine example in bringing limbers and teams up under a heavy fire" (London Gazette 10 November 1914). His Battery Commander, Major Ernest Alexander, was awarded the Victoria Cross for saving the guns under fire at Elouges. 119th Battery RFA is now P Battery (The Dragon Troop) RA in 5th Regiment RA.

He was promoted to Major in November 1915, and was the Brigade Major RA of 63rd Division (Royal Naval Division) in France in 1917-18. Promoted to Acting Lieutenant Colonel on 6th November 1918, he then commanded 95th Brigade RFA. During the First World War he was Mentioned in Despatches on five occasions.

It is recorded that he was dismissed from the Service by sentence of a General Court Martial on 16th May 1924, and was subsequently imprisoned for 6 months for embezzlement of Herefordshire Rural Community Council in June 1929. We might surmise that five years of operational service had taken its toll on his mental health, and that he might well have been suffering from PTSD. He died in May 1953.

The RA Museum is fortunate to hold around 70 of Walford’s paintings within its historical archive. Our recent addition is assumed to be one of his earliest military paintings (dated 1901). It is assessed that this depicts a Royal Military Academy training camp, perhaps in the vicinity of Woolwich, at the time he was a Gentleman Cadet there. Paintings of Woolwich at that time generally focussed on the major military buildings and the parade ground, and so this one is quite unusual. The watercolour provides an interesting insight into the cadets in their downtime at the Academy. A number of bell tents are set up in rows, each containing a bed with several soldiers going about their business. One is lying on his bed reading a newspaper, others are chatting and smoking pipes, one has a bicycle, all are relaxed.

Anyone who wishes to view the RA Museum’s wonderful portfolio of John Walford’s paintings should arrange a viewing with our Archivist, Siân Mogridge, who can be contacted via email at: enquiries@royalartillerymuseum.com